Your are in:
Home / News / The return of the Devil’s Fireplace

This grotesque and unusual fireplace must be one of the strangest items in the Gallery Oldham collections. It has been a part of the Gallery collections since 1938 and many older visitors might have memories of seeing it on display. After a recent restoration project, the fireplace is now back on show to fascinate a new generation. 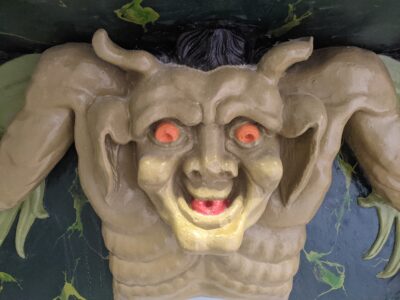 The fireplace was originally built for the Abbey Inn on West Street in Oldham. The pub first opened in 1813 but was rebuilt in 1846 and the landlord decided to give it a medieval makeover. He decorated the Abbey Inn with stained glass windows and antique furniture and commissioned this carved stone fireplace as a centrepiece.

The carved figures show the devil taking a firm grasp of a lawyer and a parson. The comic style of the carving shows that neither of these establishment figures were given much respect at the Abbey Inn. The whole scene illustrates the saying “The lawyer pleads for all, the parson prays for all, but the Devil takes all”. 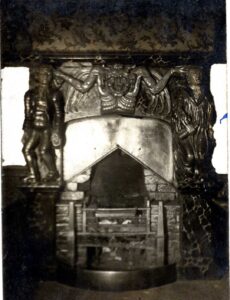 The stonemason who created this fascinating design is believed to be a man named Stott who later worked on the Houses of Parliament. But it seems that the Devil may have attracted the wrong type of customers and for many years the Abbey Inn was noted as a rough and unruly pub. Not until Oldham Brewery took over in 1892 did its reputation improve. The Abbey Inn was redeveloped for a second time in 1938 and the Oldham Brewery Company donated the fireplace to Oldham Museum.

Over its long life the Devil’s Fireplace had been painted several times. These layers of paint softened some details and lessened the impact of the design. Work to restore the fireplace to its original glory was undertaken earlier this year by stone carver and restoration expert Nick Roberson. He describes the process in detail as follows.

“The fireplace is carved from fine grained local sandstone in a rustic but very accomplished manner. It was always the intention to paint the carving which is something we are not used to seeing today. Painted carved stone was once commonplace in churches and public buildings alike. To our eyes it seems a bit garish as tastes have changed but this is something the Victorians would have been used to. 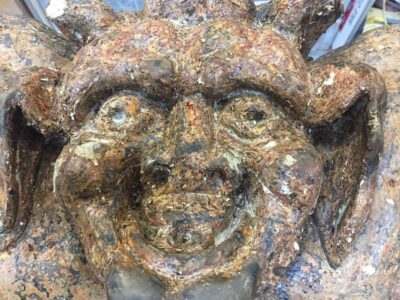 Over the years the carvings had been repainted in some areas as much as twelve times. The layers of paint became so thick that much of the detail was lost and it was only when the layers were all removed that the features such as buttons and the label on the bottle emerged. Various colour schemes appeared as I worked through the layers. At one point in time it was even painted stone colour!

Examining the layers of paint and the exact colours was very difficult as over time the oils in the paint merge with the pigment and you are left with a brown muddle. For this restoration I chose colours and techniques as close to the original as I could estimate. It was fascinating detective work.” 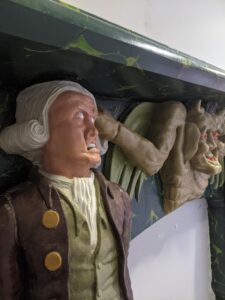